﻿
After seven years the time has finally come to tackle "The Other Side of the House", the side that no one has ventured to for quite some time.  We had intentionally, yet unspokenly, allowed it to be overtaken by nature again so that it would act as a natural deterrent between our socially challenged dog, Daphne, who rules the back yard, and our also socially challenged neighbor who just couldn't understand why Daphne barked at him so much when he came over to visit her.  With The Jungle in full force even he didn't attempt to breach the depths of the over-grown landscape.

But now its time to push forward and, as they say in the real estate biz, its time to develop that land. Well, actually I decided it was time, so one afternoon a few weeks ago I began the task of deforestation that would be required to bring a semblance of civilization back to The Other Side of the House.  With a little help from Nathan and his "root clipper" and our electric weed-eater it actually didn't take more than a couple of afternoons to get the initial clearing completed.  While I was away on Business this past week Nathan continued to rake and clear (which is a real good thing for him to take the initiative on!).  So with a three day weekend approaching I had no excuse but to plow on and begin The Big Dig.


We started out on late Friday afternoon and our goal
was to get the first level of the pond dug.  Before we began we ran through the required tools: 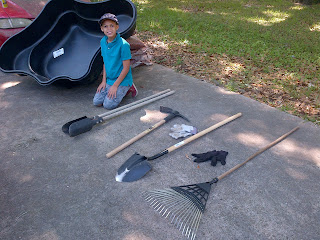 ﻿﻿
Next we placed the pre-formed pond liner roughly where we thought it should go and got final pre-dig approval from Liz.  I was all for saying this looked fine as is and moving on, but on this point I was overwhelmingly vetoed. 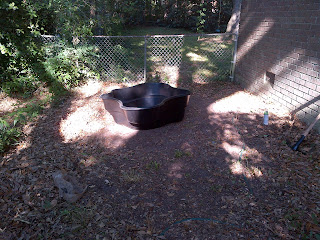 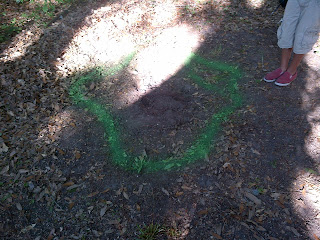 Next we spray painted the outline for the pond. At this stage the footprint looks deceivingly smaller than what it will eventually become.
Roots, why did it have to be roots?  This is one challenge I hadn't anticipated, but should have. 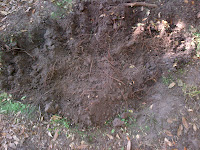 While in reality I did most of the pick axing and digging, the "official" history as Nathan has already begun to tell it is that he dug the entire thing.  I guess its my own fault that the only picture we got of the someone actually digging was of him. 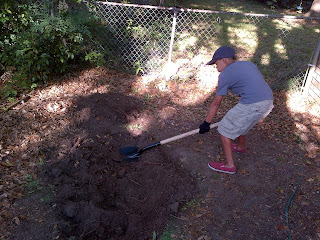 So on we dug, deep into the night, until we realized we had dug so fast and so deep that we had forgotten to leave a path out....oh, no, that wasn't us, that was Mike Mulligan and His Steam Shovel. We actually knocked off before dark and called it a day with about half the digging completed. 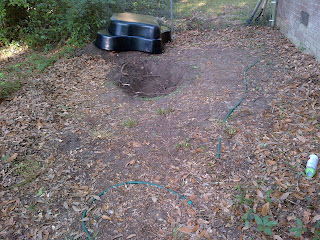 Day two started with Nathan standing in the hole and surveying the he (I) had completed thus far. 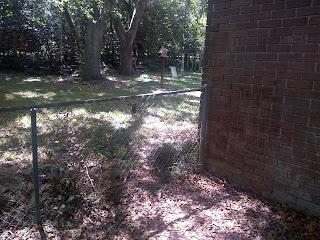 An hour and a half into Day Two and Daphne finally realizes that something is up on The Other Side of the House.  This is yet more evidence to prove the indictment that she is the worst guard dog in the history or domesticated K-9s.
Finally it was time to place the pre-formed pond liner in the hole and test out how close we were...
Turns out close, but not quite there yet. 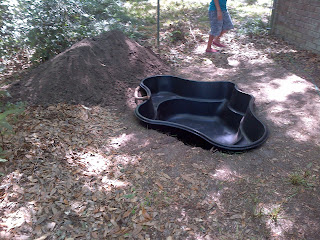 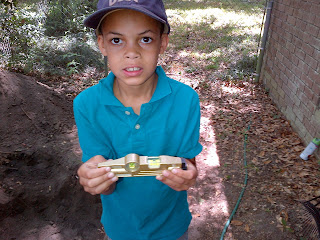 After a bit more digging, testing, and digging again we were ready to begin the final placement.  Nathan posing with the level which he did not use to make sure the pond was somewhat level (I'm the one who leveled it up, but who can argue with photographic propaganda?).
Finally we had the pre-formed pond liner in place and somewhat level, and the sides filled in.  We were ready for lunch, and another trip to Lowes for the second round of supplies. 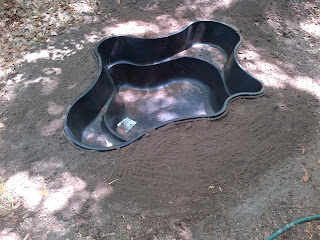 After a quick supply trip and a hot dog lunch at Lowes we had our second wind and were ready to complete the first phase of The Big Dig.  This time our supplies would be somewhat different: 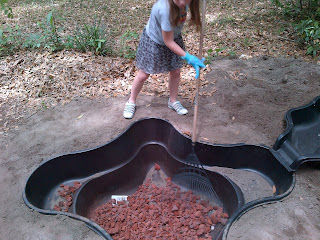 Once we began the final work on the pond Suzen decided to get into the act. Her big contribution thus far (and lets keep in mind we have the entire landscaping yet in front of us) has been to distribute the lava rock at the bottom of the pond.

After a little bit of earth rearrangement on with the mound of dirt the upper reservoir was placed and the initial layer of retaining wall set.  Then the pump and tubes were put in place, the pond filled, and wallah, Loch Langrick in all its initial glory! 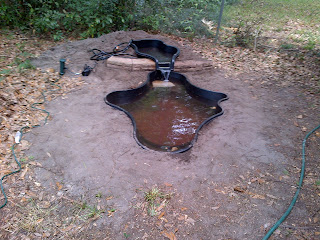 With that we called it a day and will leave the final land moving and the beginning of the landscaping phase to either tomorrow or Monday.  Here's one final view of Loch Langrick from a bit further back, I think it looks better this way at this point. 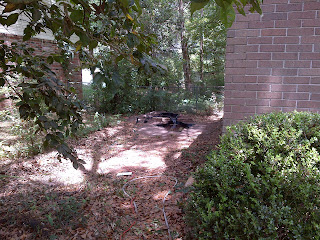