So in the wake of the country actually doing a bungee jump routine with the fiscal cliff this week CNN has decided that part of the story that is newsworthy is a small incident that apparently happened last week between House Speaker Johny Boner and Harry "Armpits" Reid in which Boner told Armpits to "go F*** yourself."  I'm not sure why this is even taking up space on the airwaves (can we still call a cable feed airwaves?).  Its not the first time a politician in high position has used the F word, and I think that Chris Christie's speech yesterday was conveying pretty much the same sentiment to Boner, just more eloquently with far more words.

But one of my favorite political F-Yous was from Lyndon Johnson, a man who as I understand had a firm grasp of the more colorful side of the English language: 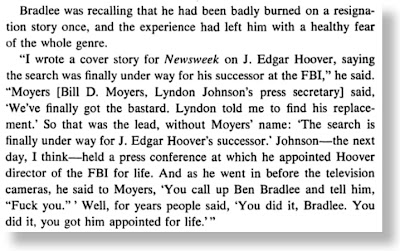 This is taken from the book "All The President's Men" and also made it into the film version with Jason Robards recounting it as Ben Bradlee himself.
Newer Post Older Post Home